VIDEO: Farewell to the keyboard and mouse came Leap Motion

This system detects the movement of the hands in front of a monitor, the new way of interacting with computers

The system detects Motion Leap hand movements in front of a monitor to perform specific tasks, represents an entirely new way of interacting with computers.

Those who tried it say it is more accurate than the mouse, as reliable as a more sensitive keyboard and a touchpad.

Andraka, Maryland, was awarded a prize of $ 75.000 to create this method of detecting cancerous.

The discovery earned him first prize at science fair and engineering the world’s largest, the Intel International Science and Engineering Fair.

Andraka, from Maryland, was awarded a $ 75,000 prize for creating this detection method carcinogen “using  blood and urine tests.” The test has shown a 90% more accurate than those used so far, is 28 times cheaper and a thousand times more sensitive than current tests for this cancer. “I’m working with Johns Hopkins to improve the patent and I am also beginning to offer the product to other companies “to market, said the young inventor.

Andraka explained that detect pancreatic cancer early increases the chance of cure to almost one hundred percent. to the advantages of his method adds the which is not invasive to the body.

The pancreas is the fourth most common cause of cancer-related deaths in the world. Risk factors include smoking, obesity, high consumption of red meat, high consumption of sugar, a diet low in fiber and diabetes mellitus. Each year 44.000 Americans are diagnosed with pancreatic cancer.

In Mexico, the solar eclipse as seen in Chihuahua, Baja California, Guadalajara, Mexico City and Monterrey 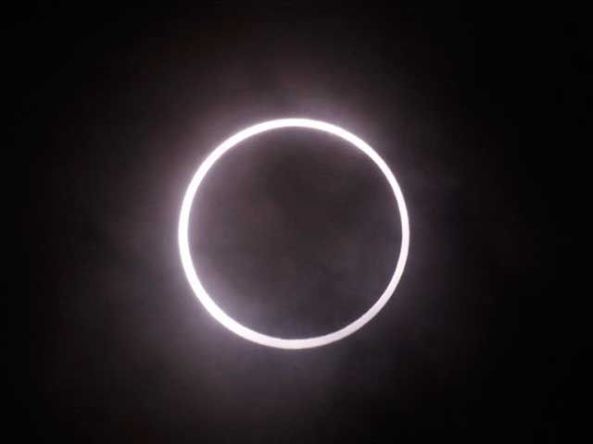 What a beautiful solar eclipse

Direction of Civil Protection called on the community not directly observe the solar eclipse that will be presented in Ciudad Juarez, said the Director General of Ecology and Civil Protection, Raul de Leon Apraez. .

It was necessary to use special eye protection, because to do so could have severe eye damage, even losing it.

He said that not just any sunglasses protect the eyes, so consider it necessary to ask the experts what type of material is indicated.

Another way to observe the eclipse is to make a hole in a card so that the light is projected on the floor.

The eclipse occurs when the Moon’s shadow does not cover completely the Sun and the star is seen as a luminous ring.

IN ASIA AND THE UNITED STATES ALSO BE APPRECIATED

Millions of people in Asia and the western United States on Monday witnessed an annular eclipse of the sun, marveling at the strange spectacle of a “ring of fire” across the heavens.

The annular eclipse, in which the moon passes the sun, but leaving only a golden ring around its edges, was also witness to a singular event as virtually had a return in time, because it was seen first Monday morning in Asia and then in the last afternoon of Sunday in the western U.S..

In some parts of the United States were sold cameras with special filters to take pictures of the astronomical phenomenon. In several parts, as in Reno (Nevada) and Oakland (California), meetings were organized to witness the eclipse.

The ring of fire our beautiful world!

There were also people from neighboring states and Canada who traveled to Albuquerque, New Mexico, to enjoy the eclipse in one of the best places to watch. Older people threw shouts and the children screamed with excitement when the moon crossed the sun and started to form the halo of light.

In Japan, organized tours to better see the eclipse, either to pleasure boats and private aircraft. Similar events were held in China and Taiwan.

The eclipse was broadcast live on television in Tokyo, where there was not a solar eclipse since 1839. The Taipei Astronomical Museum opened before dawn on Monday and Hong Kong Space Museum set up telescopes with solar filters outside their building on the waterfront of Kowloon.

Japanese television sent teams to observe the phenomenon from the top of Mount Fuji. They also sent a team to a zoo south of Tokyo to capture the reaction of chimpanzees, but they do not seem to notice.

A light rain fell in Tokyo at the beginning of the eclipse, but the clouds thinned as the eclipse reached its maximum, which gives almost perfect condition.

“It was a very mysterious,” said Kaori Sasaki, who joined a crowd in downtown Tokyo to see the phenomenon. “I’ve never seen anything like this.”

A new NASA survey has pinned down the number of asteroids that could pose a collision threat to Earth in what scientists say is the best estimate yet of the potentially dangerous space rocks.

The survey found there are likely 4,700 potentially hazardous asteroids, plus or minus 1,500 space rocks, that are larger than 330 feet (100 meters) wide and in orbits that occasionally bring them close enough to Earth to pose a concern, researchers said. To date, only about 30 percent of those objects have actually been found, they added.

Potentially hazardous asteroids, or PHAs in NASA-speak, are space rocks in orbits that come within 5 million miles (8 million kilometers) of Earth and are large enough to cause damage on regional or global scale if they were ever to hit our planet.

The new study was based on observations from NASA’s Wide-field Infrared Survey Explorer (WISE), an infrared space telescope. While the telescope data returned an estimate of the potentially dangerous near-Earth asteroid population that is similar to previous projections, it also revealed some surprising new results.

According to the survey, about twice as many asteroids are in so-called “lower-inclination orbits” — which are more closely aligned with Earth’s path around the sun than other objects — than previously thought researchers said. [Video: WISE Telescope’s Asteroid Census]