The first high-resolution images made by the browser Curiosity on the surface of Mars and views of the plain on which rested on Sunday were released today by the U.S. space agency NASA.

The first high-resolution image was taken by the upper chamber of the mast, which will be used during the navigation mission of the laboratory stock, which will seek information on the composition of the Martian surface and traces of the past presence of water on the planet red.

The snapshot, black and white, shows a plane dotted with small rocks, against which rises a ridge of hills that mark the limits of the crater Gale, a destination for this browser Martian powered by nuclear energy.

NASA explained that the image shows two depressions “were probably excavated by the blast of the proponents of the descent phase of Curiosity”, landed on the Martian surface using a new system called “Skycrane”.

Another high-resolution images received and published today shows the shadow of the mast and the “head” of Curiosity on the surface of Mars as well as a 360 degrees, which turns to see the Morte Sharp, in the Gale crater rim, where the browser will geological experiments.

The first snapshots are coming slowly, after mission managers verify the status of the instruments, placed the mast, with cameras with stereoscopic vision, upright.

The control center receives the information NASA first low resolution and gradually updating the details of the images, which in the case of the chambers of the mast not show the powder film the lower chambers of Curiosity.

The first images transmitted shortly after landing were black and white and low resolution taken with small cameras installed to detect possible damage to your wheels and the descent to Mars.

Tuesday also was the first color image of the area in which the Curiosity is taken with another camera, the Mars Hand Lens Imager (MAHLI), although this instant ocher and orange was diffused by the dust during landing.

The camera MAHLI should remove it from a dust protector and start sending new and more detailed images of Mars.

Andraka, Maryland, was awarded a prize of $ 75.000 to create this method of detecting cancerous. 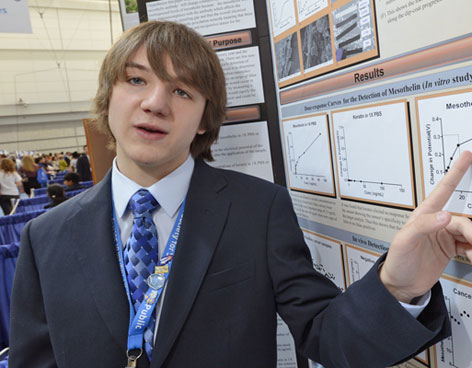 The discovery earned him first prize at science fair and engineering the world’s largest, the Intel International Science and Engineering Fair.

Andraka, from Maryland, was awarded a $ 75,000 prize for creating this detection method carcinogen “using  blood and urine tests.” The test has shown a 90% more accurate than those used so far, is 28 times cheaper and a thousand times more sensitive than current tests for this cancer. “I’m working with Johns Hopkins to improve the patent and I am also beginning to offer the product to other companies “to market, said the young inventor.

Andraka explained that detect pancreatic cancer early increases the chance of cure to almost one hundred percent. to the advantages of his method adds the which is not invasive to the body.

The pancreas is the fourth most common cause of cancer-related deaths in the world. Risk factors include smoking, obesity, high consumption of red meat, high consumption of sugar, a diet low in fiber and diabetes mellitus. Each year 44.000 Americans are diagnosed with pancreatic cancer.

In the morning the Popocatepetl registered 26 eruptions of low and medium intensity, the National Center for Disaster Prevention

MEXICO CITY, May 8. – The President, Felipe Calderon, posted on his Twitter account a photograph of Popocatepetl, that on his way to Puebla, the image was a favorite site for photo editing Instagram .

In the morning the Popocatepetl registered 26 exhalations of low and medium intensity, the National Center for Disaster Prevention, which warned “high” of volcanic activity.

Also reported that the set of seismic activity was accompanied by the emission of a dense continuous plume of water vapor, gas and small to moderate amounts of ash.

This observation yields insights about the harsh environment around black holes and the types of stars swirling around them.

PASADENA, Calif. – Astronomers have gathered the most direct evidence yet of a supermassive black hole shredding a star that wandered too close. NASA’s Galaxy Evolution Explorer, a space-based observatory, and the Pan-STARRS1 telescope on the summit of Haleakala in Hawaii were among the first to help identify the stellar remains.

These hefty monsters lie quietly until an unsuspecting victim, such as a star, wanders close enough to get ripped apart by their powerful gravitational clutches.

Astronomers had spotted these stellar homicides before, but this is the first time they have identified the victim. Using several ground- and space-based telescopes, a team of astronomers led by Suvi Gezari of the Johns Hopkins University, Baltimore, Md., identified the victim as a star rich in helium gas. The star resides in a galaxy 2.7 billion light-years away. The team’s results appear in today’s online edition of the journal Nature.

These images, taken with NASA’s Galaxy Evolution Explorer and the Pan-STARRS1 telescope in Hawaii, show a brightening inside a galaxy caused by a flare from its nucleus. Image credit: NASA/JPL-Caltech/JHU/STScI/Harvard-Smithsonian CfA › Full image and caption

“When the star is ripped apart by the gravitational forces of the black hole, some part of the star’s remains falls into the black hole, while the rest is ejected at high speeds,” Gezari said. “We are seeing the glow from the stellar gas falling into the black hole over time. We’re also witnessing the spectral signature of the ejected gas, which we find to be mostly helium. It is like we are gathering evidence from a crime scene. Because there is very little hydrogen and mostly helium in the gas, we detect from the carnage that the slaughtered star had to have been the helium-rich core of a stripped star.”

This observation yields insights about the harsh environment around black holes and the types of stars swirling around them. It is not the first time the unlucky star had a brush with the behemoth black hole.

The team believes the star’s hydrogen-filled envelope surrounding the core was lifted off a long time ago by the same black hole. The star may have been near the end of its life. After consuming most of its hydrogen fuel, it had probably ballooned in size, becoming a red giant. Astronomers think the bloated star was looping around the black hole in a highly elliptical orbit, similar to a comet’s elongated orbit around the sun. On one of its close approaches, the star was stripped of its puffed-up atmosphere by the black hole’s powerful gravity. The stellar remains continued its journey around the center, until it ventured even closer to the black hole to face its ultimate demise.

Astronomers predict stripped stars circle the central black hole of our Milky Way galaxy. These close encounters are rare, occurring roughly every 100,000 years. To find this event, Gezari’s team monitored hundreds of thousands of galaxies in ultraviolet light with the Galaxy Evolution Explorer, and in visible light with Pan-STARRS1. Pan-STARRS, short for Panoramic Survey Telescope and Rapid Response System, scans the entire night sky for all kinds of transient phenomena, including supernovae.

The team was looking for a bright flare in ultraviolet light from the nucleus of a galaxy with a previously dormant black hole. Both telescopes spotted one in June 2010. Astronomers continued to monitor the flare as it reached peak brightness a month later and slowly faded during the next 12 months. The brightening event was similar to the explosive energy unleashed by a supernova, but the rise to the peak was much slower, taking nearly one-and-a-half months.

“The longer the event lasted, the more excited we got, because we realized this is either a very unusual supernova or an entirely different type of event, such as a star being ripped apart by a black hole,” said team member Armin Rest of the Space Telescope Science Institute in Baltimore.

This computer-simulated image shows gas from a tidally shredded star falling into a black hole. Some of the gas also is being ejected at high speeds into space. Astronomers observed the flare in ultraviolet light using NASA’s Galaxy Evolution Explorer, and in optical light using the Pan-STARRS1 telescope on Mount Haleakala, Hawaii. The light comes from gas falling into the black hole, and glowing helium from the star’s helium-rich gas expelled from the system. Image credit: NASA/JPL-Caltech/JHU/UCSC › Larger view

By measuring the increase in brightness, the astronomers calculated the black hole’s mass to be several million suns, which is comparable to the size of our Milky Way’s black hole.

Spectroscopic observations with the Multiple Meter Telescope Observatory on Mount Hopkins in Arizona showed the black hole was swallowing lots of helium. Spectroscopy divides light into its rainbow colors, which yields an object’s characteristics, such as its temperature and gaseous makeup.

To completely rule out the possibility of an active nucleus flaring up in the galaxy, the team used NASA’s Chandra X-ray Observatory to study the hot gas. Chandra showed that the characteristics of the gas didn’t match those from an active galactic nucleus.

For images, video and more information about this study, visit: http://hubblesite.org/news/2012/18 .

For graphics and information about the Galaxy Evolution Explorer, visit: http://www.nasa.gov/galex and http://www.galex.caltech.edu .