Sex, limbs and duct tape: the marriage of Ben and Narcy Novack

Hoping to establish multiple motives for the murder of Ben Novack, allegedly by his wife, the feds plan to give jurors a lurid portrait of their marital life.

If a court brief filed by federal prosecutors is even partly true, Ben and Narcy Novack had a profoundly dysfunctional marriage — and a life of sex, limbs and duct tape would have made a South Beach madam blush.

Narcy, who faces trial next month in her hotel tycoon husband’s slaying, told the FBI and others that her husband was a pedophile who would give artificial limbs free to amputees in return for sex; that he arranged sham marriages as part of an immigration scam involving his exotic dancer mistress, and that he encouraged his wife to duct-tape him and abuse him during sex.

The court papers released this week contend that Narcy reported some of the behavior to police, the FBI and family members in the years before Ben’s murder.

Prosecutors intend to use her admissions and details of the marriage in general, to establish a “sick, vicious cycle” that drove her to kill her husband out of anger and greed.

The court papers also, for the first time, identify Ben Novack’s mistress, Rebecca Bliss, a tattoo-artist/exotic dancer whom he set up in a lavish apartment on Marina Bay Drive in Fort Lauderdale.

It is alleged that his doting on her infuriated Narcy.

According to the court papers and sources close to the case, Ben bought furniture for Bliss’ apartment, and when Narcy discovered the affair, she called Bliss’ landlord and told him to cancel Bliss’ lease because her husband was dead.

He was, in fact, very much alive at the time. Novack’s murder wasn’t until seven months later.

Narcy Novack, 55, remains in a Westchester County, N.Y., jail on charges of first-degree murder and racketeering in the executions of her husband and her mother-in-law, Bernice Novack, 86. Authorities allege that Novack and her brother, Cristobal Veliz, 58, of Philadelphia, orchestrated the murder-for-hire plots so that Narcy could inherit his estate, worth at least $10 million.

Three alleged accomplices, two of them hit men hired in Miami to do the killings, are cooperating in the case. They have provided details about Ben and Narcy Novack’s marriage that prosecutors say lend credibility to their narrative of the Novack murders.

Ben Novack, son of the man who built Miami Beach’s landmark Fontainebleau hotel, was found beaten to death on July 11, 2009, in his hotel in Rye Brook, N.Y., where he was at an Amway meeting he had booked as part of his $50-million-a-year convention planning business. His body, which was bound and gagged with his eyes slit, was found by his wife, a former stripper with whom he had a tumultuous 17-year marriage.

His mother, onetime queen of the Fontainebleau, was found dead in her Fort Lauderdale home three months before. Her death was initially ruled accidental by Fort Lauderdale police and the then-Broward County medical examiner. After Ben Novack was found dead, however, police were forced to reopen the case and eventually new evidence showed that she in fact had been beaten to death with a monkey wrench in her garage. What’s more, the court papers released this week reveal that the killers tried unsuccessfully to harm her in the weeks before the actual murder.

Novack and Veliz have pleaded innocent.

Veliz also told one of the killers that Ben had a business involving artificial limbs that he used to lure amputees or their relatives into having sex with him in exchange for free limbs, engaging in “sick sexual habits.”

They also said that in 2008, a year before the murders, Narcy told the FBI that her husband was arranging sham marriages and that one of the sham brides in the scheme was Bliss, with whom he had been having an affair. That same year, Narcy also told a Mexican customs officials that her husband had illegally smuggled $10,000 into Mexico. When the FBI failed to take action against her husband, prosecutors said Narcy began to plot her husband’s murder in earnest, according to the court papers.

Prosecutors also intend to introduce evidence of a 2002 incident at Ben and Narcy’s Fort Lauderdale home in which Narcy handcuffed him to a chair and blindfolded him, leading him to believe they were about to engage in a bondage/sexual ritual that was a “mainstay of their marriage.” Instead, she slugged him in the face and removed property and thousands of dollars from the house.

Afterward, she told police that she was upset because her husband was having sex with amputees and that their marriage was so physically, sexually and emotionally abusive that she had left him as many as 50 times.

“That incident is no more sensational or disturbing than [these] crimes with which [Narcy] is charged,’’ prosecutors said in asking the court to allow the 2002 incident to be admitted at trial.

Prosecutors also allege that, in the months following the murders, Narcy Novack set out upon a shell game, moving valuable property, jewelry and other items that belonged to her husband and mother-in-law, illegally moving them in and out of various safe-deposit boxes in an effort to hide the assets.

Earlier this week, a lawyer showed up at a pretrial hearing for Novack in Westchester, N.Y., claiming he had several pieces of jewelry, worth up to $200,000, given to him by Narcy that she wanted him to use as payment for co-representing her. Her court-appointed attorney, Howard Tanner, was caught off guard by the move, as was the prosecutor, Elliott Jacobson, and the federal judge, U.S. District Court Judge Kenneth Karas.

Karas, visibly perturbed, reminded Novack that she had earlier pleaded that she had no money and that taxpayers were paying for Tanner to represent her. The estate’s assets have been frozen pending the outcome of the trial. Should Novack be convicted, she loses all rights to his fortune

Abused, starved and naked, a 9-year-old boy was rescued by neighbors when he was found on the streets. A Miami judge Monday demanded to know how it happened. 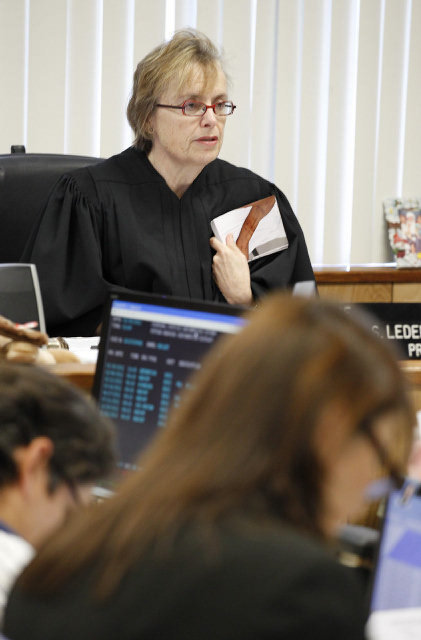 Miami-Dade Circuit Judge Cindy Lederman reacts as she questions DCF officials Monday. The judge is holding a photographed of injuries suffered by a 9 year-old child.

Joseph Lee studied a color snapshot of his 9-year-old nephew Monday as a Miami child-welfare judge glanced at Lee.

The judge was looking for signs that Lee was as disturbed by the photo as she was. But Lee simply stared at the picture.

The photo, which was not released publicly, depicted a little boy who had become so emaciated that his bones protruded from his skin, and his eyes bulged from their sockets, Miami-Dade Circuit Judge Cindy Lederman said. She likened him to a concentration camp survivor.

The boy was discovered by police wandering his North Miami Beach neighborhood Saturday — beaten, naked and starving. His parents, 34-year-old Marsee Strong and 40-year-old Edward Bailey, remain at the Miami-Dade County Jail on charges of aggravated child abuse and neglect. On Monday afternoon, they were still jailed and had yet to post $65,000 bail.

The boy and four of his siblings were placed in the custody of Lee, a maternal uncle who was ordered by the judge not to allow the boy’s parents any contact with him. Lee also agreed to adopt the children if their parents are unable to regain custody. The boy also has an 18-year-old sister who is pregnant.

On Monday afternoon, Lederman, a veteran child-welfare judge with a history of overseeing some of South Florida’s most notorious child-abuse cases, demanded answers.

“He looks like he just came out of Auschwitz,” Lederman said. “This is like a neon sign for child abuse. It would have been obvious to anyone who came in contact with this family the last few years.”

Among those who came in contact: a child-abuse investigator from the Department of Children & Families, a mental health counselor from Jackson Memorial Hospital and educators from the 9-year-old’s school — who called the state’s child abuse hotline recently seeking help for the boy.

Lederman set a hearing for next month to hear from all those people. “It appears to me that there has been gross negligence here,” she said.

The boy — who is not being named by The Miami Herald to protect his privacy — was found wandering the neighborhood near his house, at 1417 N.E. 152nd Street, at about 8 p.m. Saturday night. North Miami Beach police say he had jumped out the window of his parents’ home “to escape his abusers.”

Paramedics rushed the boy to the hospital, where he begged for food and told caregivers he had not eaten in three days. His body showed “permanent marks of abuse all over,” according to an arrest report.

His tiny body weighed as much as a 2-year-old’s. His hands and feet were “swollen from the lack of food,” the police report said.

“The victim appeared to be extremely abused,’’ a police report said.

The boy’s mother denied hitting the child but “admitted to failing to protect her child from others and not properly supervising him and getting him medical treatment in a timely manner,” the police report said. The boy’s father also denied hitting the boy but admitted he allowed “others” to hit him, police said.

At the hearing Monday, Lederman was told that DCF’s history with the family went back to 2007, and that the agency had received reports on the children as recently as this month. One recent call to the state’s abuse hotline, on Dec. 11, was designated a “special conditions report” instead of an abuse report — meaning child-protection workers were asked only to inquire whether the parents wanted help from the state, not to determine whether their children were being abused or neglected.

In one incident on Friday night, masked gunman attacked several luxury vehicles as they exited the international airport east of San Pedro Sula. The attack was highly coordinated and carried out in approximately two minutes. The gunman, who may have been posing as police officers, forced six individuals to exit their vehicles and lie face down on the pavement, where they were shot at point blank range.

Security Minister Pompeyo Bonilla said that the attack was motivated by conflict between rival gangs from La Ceiba, a port city on Honduras northern coast, thought to involve two groups known as the Grillos and the Pelones. Police said that the target was one of the victims, a man called Olvin Francisco Castro Guevara, who had just arrived from Miami with his wife and two children. The wife was injured in the attack, but the children were reportedly unharmed.

The second incident, a shooting in San Pedro Sula’s Central Penitentiary, left nine inmates dead and another three wounded. Prison officials blamed the violence on a dispute between rival gangs, but some accounts said that a group of prisoners was attempting to escape, raising the possibility that prison officials were involved in the killings.

With an average of 20 homicides per day, Honduras currently has one of the highest murder rates in the world. The country’s location, along with its weak security institutions, have encouraged transnational organized crime groups to use the country as a distribution center for cocaine being smuggled from South America to the U.S.