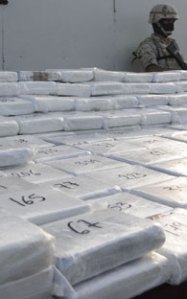 cocaine in PeruImage via Wikipedia

“Mexican traffickers have forged a role in the drug trade in Peru, and are increasingly involved in coordinating large shipments of drugs,” said Benson, to testify before a Senate committee.

The drug trafficking organizations in Colombia are also involved in money laundering activities, he said.

Peru has surpassed Colombia in cocaine production, which the DEA attributed to the demand in emerging markets in Europe, Asia and Australia, where prices are more competitive, said Benson.

He added that eradication has been complicated by the presence of Sendero Luminoso, considered a terrorist by the United States in key areas of culture, particularly in the Upper Huallaga Valley and Valle del Río Apurimac and Ene (VRAE).

Also participated in the hearing the secretary of state for narcotics control, Willliam Brownfield, Assistant of State for Western Hemisphere, Kevin Whitaker, and assistant defense against narcotics, William Wechsler.

Responding to questions from Democratic Senator Dianne Feinstein, Brownfield said in the audience the importance of addressing the drug problem as a “package” that includes interceptions, supply and demand, rehabilitation and treatment.

You should also consider the eradication of coca leaf, the seizure of precursor chemicals and the location of laboratories, combating money laundering and the arrest of drug traffickers.

He added that efforts under Plan Colombia have achieved results, Peru has sent messages “mixed”, Bolivia has rejected cooperation with Venezuela, and efforts are not working.

He noted that Honduras has indicated that it lacks the resources to confront the drug cartels and the need to strengthen efforts throughout Central America and the Caribbean.

Feinstein said that the problem of drug production in the Andean region is fueling the violence in other nations.

“Despite the impressive progress in security in Colombia, the country produces more than 90 percent of the cocaine seized in the U.S.,” he said.

The hearing also addressed more opportunities for U.S. cooperation with Colombia, Peru, Ecuador, Bolivia and Venezuela, as well as the increasing use of submarines and speedboats to transport cocaine to the U.S. market.